A Curious Beginning, the first Veronica Speedwell mystery by Deanna Raybourn, makes for a fun and adventurous escape. Slightly outside my normal reading avenues, the strong willed Veronica Speedwell carries her weight in a plot driven novel. She steps outside of the expected or even accepted female role of her time to choose her own path. After she meets Stoker, witty banter and the mystery heat up. The dynamic between the two leads keep me smiling and turning the pages. This beginning has me curious to continue the series. 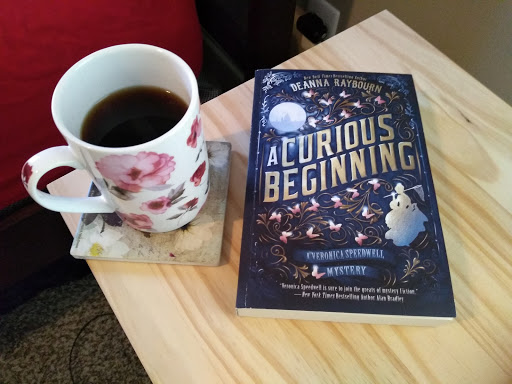 Happy New Year! As we begin a fresh calendar year, I want to share my top reads from 2018. That way we can start our reading lists with good titles and a reminder of the plethora of wonderful reads awaiting us.

Cheers to another great year of reading!

Ariel Lawhon’s I Was Anastasia has given me my first introduction to Anastasia and the Romanov family outside of the animated film named after Anastasia I saw once in theaters as a child, and I have enjoyed learning about the history surrounding the Romanovs, their captivity and Anna Anderson’s identity.

Told backwards from Anna’s perspective and in normal progression from Anastasia’s, the storylines unfold until their timelines converge. This structure keeps readers engaged as well as thinking because it requires another level of thought to keep the events straight. It also carries a certain weight as the anticipation of what readers know comes at the brutal end for Anastasia leaves a feeling of dread in the background. I have learned a lot about these people’s experiences, different as though they stand. Though this book doesn’t fall into an uplifting category, I appreciate how informative and interesting Lawhon has made it.

This book has not only introduced me to the Romanovs and their history but to Russian history as well. Somehow I have not learned much about Russia, and I would like to continue. I have a couple classics lined up for reading next year.

If you read I Was Anastasia and would like to pair it with another book that explores some of Russia’s history, I highly recommend the modern classic A Gentleman in Moscow by Amor Towles (my review here). It follows a man under house arrest at a hotel for many years, and it has a great cast of characters and story. This would also pair well with a viewing of Casablanca.

I recently read Two Girls Down by Louisa Luna, a mystery book out of the norm of my usual reads. While the story kept me engaged with a desire to know what happened to the kidnapped girls, it did not leave any lasting impression. The characters did not have a lot of depth; they also did not grow or learn much. By the end of the story, the events got more perverse. It seemed like it went for more of a shock value than any nuance in human behavior. I enjoyed the mystery to an extent, but I noticed better books exist in this realm. This one will not stay on my bookshelf.

I recently finished reading Nicholas Sparks’ second newest novel See Me. Though I consider myself a big Sparks fan, I did not enjoy this story nearly as much as his other books. Seeing him write a story with a greater thriller aspect showed a range in his talents, but the story didn’t get as deep as usual.

The characters were in their mid twenties like me, and I wouldn’t have guessed that. Colin attending college classes gives him a younger aspect, but Maria didn’t seem to hold many similarities to me or any of my friends my age. Unlike most of us, she got right into a good career track and in law, a tough field. To top off the two dimensional characters, the suspense had hit and miss elements. The mystery itself for the stalker had its strength and would have fit into the thriller genre as far as I can tell since I don’t read many books in that genre. However, it took multiple paragraphs to get to an assailant sneaking up to Maria. Even I knew the forthcoming action and didn’t feel added suspense waiting those extra descriptive paragraphs just for the actual event.

I still enjoyed the book and still love Sparks. This book just might rank last in all the ones I’ve read. I suppose one has to land there. It shows Sparks can flex his writing muscles in genres outside love stories, and it demonstrated the power of a close knit family (Maria’s) and how people and look out for and comfort each other.