So far I have adored every Kate DiCamillo story I’ve read, and her Newbery Honor book Because of Winn-Dixie tops my list. Young Opal rescues her new dog Winn-Dixie, but the canine saves Opal as much as Opal saves her. Together, they embark on a journey to find a place to belong. The courage Opal finds with a friend by her side warms my heart, reminding me of the importance of support. Those brave steps forward lead to new friends and shares hope with readers as they sympathize and laugh with Opal. The characters give the story a perfect flair.

*Link is to my Bookshop affiliate page. 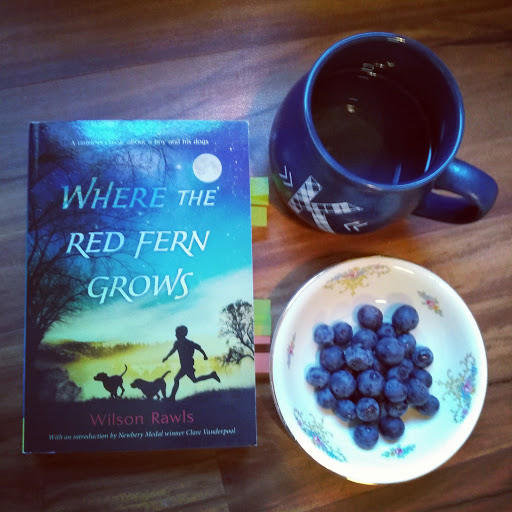 I recently reread this classic that also made the first spot on the list of books that brought tears to my eyes. Reading this as an adult affirmed its status in literature. Wilson Rawls wrote a story about a boy worthy of our cheers as he worked to buy and train his hunting dogs. Immersed in the poor, rural setting, I felt a content participant in Billy’s life. I wanted to encourage him on his quest to become the best coon hunter as I saw the people in his life come together for a common cause. Loyalty and dedication abounded as positive themes throughout the story, not only from the dogs but from Billy as well. He made a good example what it takes to overcome odds and meet goals.

The Harry Potter series has a top spot on PBS’s The Great American Read list, and some fellow Modern Mrs. Darcy Book Club members have decided to read the entire series over the course of the year. That gives me an opportunity to keep a slow, steady pace to dive deeper into J.K. Rowling’s stories and characters, especially since this is not the first time I’ve read them. I have started Harry Potter and the Sorcerer’s Stone this weekend and already see points of interest. This series has so many angles and resources to see.

Grab a broomstick (or catch the Hogwarts Express train) and follow me to Hogwarts castle as Harry realizes the truth behind “yer a wizard” and attends the School of Magic for the first time. Harry figures out his identity, and the story keeps the wizarding world at stake through an epic battle of good versus evil. Follow along for a coming of age story for the ages.