Beth O’Leary’s debut novel The Flatshare makes such a delightful read. At once like having a drink during a cringeworthy first date and sipping tea with a close friend, it hits all the marks of a comfort read. Tiffy makes a relatable and likable character as she steps from one unfortunate situation to a more awkward one as she lets go of an unhealthy long term relationship. I particularly enjoy how her friends stand by her and how they all give so generously not only to their friend group but their general community. Tiffy and Leon communicate mostly via sticky notes, and it builds the anticipation of their in person meeting so well. Plus, it gives time for them to develop their thoughts and background of each other, which invites the reader into reflection as well. They ease into a friendship and a safe space to work through some of their issues. It also brings to light emotional abuse and gaslighting ramifications, which makes room for readers to consider what makes a healthy relationship and to celebrate the growth from victim to victor. I want to be part of Tiffy’s friend group as another strong woman, and I look forward to O’Leary’s next book releasing soon.

Sucked right into Grady Hendrix’s The Southern Book Club’s Guide to Slaying Vampires, I gripped the pages like a vampire sinks its teeth into its victim. A strong sense of a southern community filled with housewives made a perfect setting for a vampire to sneak into the house next door. The mystery and drama led me through a delightful escape as I grew more interested in the heroine Patricia. It reminded me of Fright Night with an age adjustment and less gore and language. I felt reluctant to return to the real world and continue to yearn to turn these pages again. There will be regular rereads of this in the future.

Though Lucy Maud Montgomery’s classic tale about the beloved Anne Shirley cannot be replaced, Sarah McCoy’s Marilla of Green Gables offers a comforting visit to Prince Edward Island. In this story, we see Marilla’s young adult life before she and her brother Matthew take over Green Gables. It reads like sipping a cup of hot tea while chatting with a best friend as well as while comforting each other during tough times. Each circumstance offers a flavor that makes me want more. As with Montomery’s series, I find myself wishing I could meet the characters.

If you would like your own copy of Marilla of Green Gables, the link takes you to my Bookshop affiliate page. I get a small commission, and we support independent bookstores and authors.

So far I have adored every Kate DiCamillo story I’ve read, and her Newbery Honor book Because of Winn-Dixie tops my list. Young Opal rescues her new dog Winn-Dixie, but the canine saves Opal as much as Opal saves her. Together, they embark on a journey to find a place to belong. The courage Opal finds with a friend by her side warms my heart, reminding me of the importance of support. Those brave steps forward lead to new friends and shares hope with readers as they sympathize and laugh with Opal. The characters give the story a perfect flair.

*Link is to my Bookshop affiliate page.

After hearing numerous students gush about Shannon Messenger’s middle grade series The Keeper of the Lost Cities, I finally have read the first book myself. It lives up to their hype. Sophie makes a likable, admirable, and relatable protagonist. An encounter at a museum leads her to discover her identity as an elf, and the story follows her adjustment to a new world, family, and friends. Though she feels like an outsider at her new school as much as she did at her human one, she embraces her abilities and explores their potential. Vaguely reminiscent of Harry Potter, I find this a brighter alternative. Messenger achieves a great balance between world building and character development, and I find myself tearing through the pages. I’ve acquired the next installment already and happily reported to my students I enjoyed it (and thanked them for the recommendation).

Kate Clayborn’s recent Love Lettering invites readers to stroll New York City streets with a hopeful new friend. Meg and Reid met as Meg designed Reid’s wedding program, and he finds his way back to her office a year later because he discovers that she successfully guessed his relationship’s demise. Both at potential turning points in their life, they connect over their new goals. Clayborn utilizes the signs on the streets to give insight into the characters as they progress through their journeys on foot and in their hearts. They get their opportunities to step forward rather than stagnate, leaving readers with a reminder they too can face their obstacles to reach new heights. The signs point the way when they recognize the directives and follow.

Diana Biller’s debut novel The Widow of Rose House invites you into an atmospheric read perfect for the fall season. Though it takes place in a Gothic mansion in Gilded Age New York, it reads more like a modern love story. A possible ghost in a house Alva Webster moves into to restore serves as a vehicle for plot and character development. The setting details provide an escape, and the evolving love story invites reader engagement. Be warned neither the ghost nor the intimate scenes care to close doors. Yet also know Alva holds much more strength than may first meet the eye. This spooky tale has a hopeful outlook and demonstration of love.

Click here to get your own copy from my Bookshop affiliate page.

Jasmine Guillory’s latest romance Party of Two surpassed my expectations. With more substance and maturity than her previous stories, these characters had me not only rooting for their relationship but celebrating their personal growth. Lawyer Olivia Monroe and junior senator Max Powell have more age and career experience under their belts than the leads from The Wedding Date and The Proposal, and this serves to their advantage. They have a sense of their values and goals and take the time to consider how their next steps might or might not progress them. The communication and reflection may seem like they would slow down the story, but it allows the readers to savor the romance as well as contemplate healthy relationship adjustments.

I read Head Over Heels by Hannah Orenstein with a friend as a fun way to connect while we don’t get to see each other. The story follows a predictable but fun romance plot when would have been Olympic gymnast Avery reconnects with another former athlete when she moves back to their hometown and they start working together. Their shared goal to get a talented gymnast into the 2020 Olympics makes a good central point for discussion points like the abuse scandal, career and purpose, healthy relationship dynamics, and more. While these issues don’t get detailed responses on the pages, the characters, particularly the women, make positive models for how empathy and empowerment can grow when people reflect and adjust. I would have loved to see more character development there but appreciate the strong frame. Overall, it makes a quick but fun and motivating read. 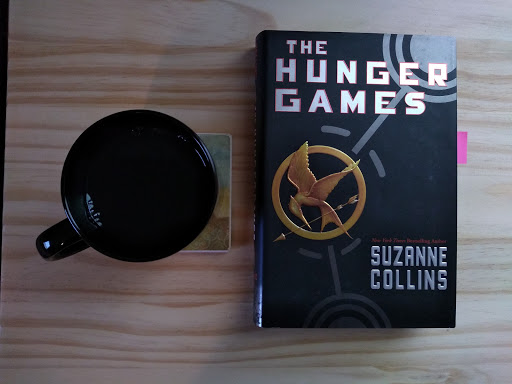 I recently have reread The Hunger Games trilogy by Suzanne Collins and have discovered a deeper appreciation than I had for it when I first tore through the first installment’s pages this time eleven years ago. In The Hunger Games, Suzanne Collins paints us a society we tell ourselves differs greatly from ours but that deserves our attention as a warning. Children regularly face publicized death in a system citizens fear to speak against. When Katniss Everdeen volunteers in place of her sister Prim, she sees herself as sacrificing her life in place of Prim’s. Yet she ignites a spark of hope instead.

Though the first time around I brushed off Peeta Mellark, the male tribute from Katniss Everdeen’s District 12, I have found a deep appreciation for his steadfastness. Only glimpsed in this introduction to the series, he shows the most unconditional love and stable support of his team. Katniss may look to her interests first, even if they are foremost for her family, but Peeta holds true to his values. This requires a look beyond the supposedly boring exterior presented through his seemingly lack of strength. A second read allows this opportunity of greater study of all the characters as well as Panem’s structure as a society.

The Hunger Games has brought Suzanne Collins notoriety for a reason. The books have an action-packed plot, the love triangle expected in a YA book, and likable characters. Seemingly an escape from reality, it offers a springboard for considerations about sacrifice, unconditional love, strength in all its forms, control, and rebellion. It has stirred a lot of contemplation in my mind when it comes to sacrifice, unconditional love, and mental health, particularly where those topics merge. I owe this series a token of gratitude for helping me see the strengths of the Peeta in my life.