William Goldman’s classic fantasy adventure The Princess Bride provided the perfect escape for my Valentine season reading. It may do the same for COVID-19 social distancing too. Westley the farm boy and Buttercup the belle of the farm fall in love despite their odds. Though distanced for a time, they reunite when Westley rescues Buttercup from a kidnapping. Together and apart they face numerous foes, providing plenty of humor along the way. Full of comical quotes, Goldman lends a satirical voice to his story. It has delightful love quotes too, such as Westley saying, “Do I love you? My God, if your love were a grain of sand, mine would be a universe of beaches.” Westley’s quest to marry Buttercup and the friends they gain along the way have you rooting for each person’s goal. This story has a perfect balance of romance and action that may suit many for a date night to discuss the book or watch the movie. 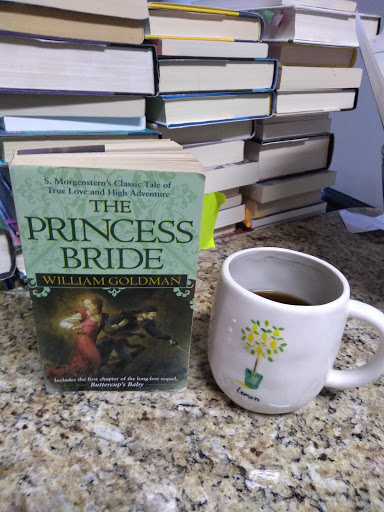 February ends in less than a week, and spring comes soon. As I start to ease out of the winter blues, I have some books lined up for those days spent indoors. They range from atmospheric, character driven novels to classics.

Beartown by Fredrik Backman: This weekend I finally have this book beloved in book club circles on my docket. A couple chapters in I already feel immersed in the small forest town that revolves around its hockey team. Backman goes deep into the minds of his characters, and I sense a foreboding event. I anticipate reading how the characters respond to the situation and how they interact with each other. This community offers insight on relationship and organization dynamics.

Persuasion by Jane Austen: Though the novel doesn’t have a wintery setting, it transports you to Victorian England. The story explores social class and mores as well as its expectations for love. Anne has a failed love story in the background, so I look forward to seeing how encountering her lover again shapes her marriage prospects and how Austen’s trademark wit plays into it. I already find myself daydreaming about the cottages and the names as well as my Pride and Prejudice reread for my Great American Reader project.

Harry Potter and the Chamber of Secrets by J.K. Rowling: The second installment in the Harry Potter series continues my Great American Reader project as well as my book club community read as we read the series this year. In England again, this time in the beloved Hogwarts castle, the school walls protect the students against the cold and darkness as Voldemort fights to gain power. Hogwarts offers respite from the winter as well as a fantasy adventure rooted in good vs evil. Harry and his friends continue to grow up and face moral dilemmas that make you root for them while wishing you attended Hogwarts too.

The classic The Count of Monte Cristo gives us an adventurous revenge tale that has stood the test of time. Entertaining since its 1844-45 release, this story holds themes and plots of intrigue that still interests readers today. It even has inspiration from a true crime, a topic that has boomed into its own nonfiction category recently. The actual book resembles a brick in its physical dimensions, but so far it reads simply enough.

First, the story begins in Marseille, France near a Notre Dame de la Garde port in 1815. Young Edmond Dantes leads the ship Pharaon to Fort Saint-Jean as its first mate, and he has the promise of becoming captain due to Captain Leclere’s death during the voyage. At somewhere between 18-20, Dantes already holds a lot of hope for a satisfying life with the prospect of becoming a captain so young and marrying a beautiful woman.

Dantes couldn’t fill a 1,000+ page book if those details unfolded so easily though. Danglars, the supercargo slightly older than Dantes and generally less well liked, greets ship owner Morrell with a story about Dantes that contradicts the one Morrell heard from Dantes. This only marks the beginning of the words Danglars spins to paint a negative portrait of Dantes. He later demonstrates how a pen and words can hold as much as and more danger than a sword or pistol.

Sweet reunions abound when Dantes visits his father and then his fiancé Mercedes to arrange their marriage. However, Mercedes accepting Dantes stings Fernand because he wants to marry his cousin Mercedes. Upon leaving, he accepts the invitation to join Danglars and Caderousse as they plot a downfall for Dantes. This leads to an interruption at the betrothal party that ends with men arresting Dantes. In a parallel scene, we see the judge Villefort leave his own betrothal party to oversee Dantes in court. The lies continue to thicken as Villefort sees the letter allegedly condemning Dantes reveals a secret about himself. So he sends Dantes to a cell at Chateau D’If.

These first seven chapters set up a story of secrets and deceit. The players who play a key role in Dantes’s arrest cater to their selfish ambition and jealousy despite the harm they cause. Now I wonder to what lengths Villefort will go to keep his secret and therefore maintain his position in society and how far Danglars will go to get his desired status on the ship as well as how deep his dislike for Dantes goes and why. Of course the story continues with Dantes going to jail, so I wonder how he will handle imprisonment. I know a revenge plot and treasure adventure has yet to unfold.

I now have had my second experience with the Brig o’ Doon, and I must say I have enjoyed this young adult retelling much more than the movie my college roommates and I watched years ago. This magical twist on time travel and fantasy makes for a fun adventure and of course includes plenty of romance. It even adds a thoughtful layer of faith and community.

As best friends Mackenna and Veronica find themselves crossing the mythical Brig o’ Doon and entering Doon’s kingdom during their trip to Scotland, they find themselves on an adventure much different than they imagined. They stick together to contribute to the community and ultimately to save it. Along the way, they learn how to deepen their faith in what will unfold for their fates as well as that of Doon and to trust each other. We see that sharing burdens of truth and uncertainty makes it easier to handle situations than facing them completely alone, as Veronica does in a prideful attempt to protect her friends. The strength of friendship and community ultimately wins the day.

Between the unique people and kingdom, the general sense of adventure and unique way to look at faith, I have enjoyed my trip to Doon. I look forward to continuing the series to read what happens next. I’m also curious to check out the source material. Though the movie I’ve seen has generally low reviews, the TV special with Robert Goulet has positive ones. Here’s to the next adventure having singing and dancing!

Yesterday I finished reading Nina George’s novel The Little Paris Bookshop, and for the first time I gave fewer than three stars to a book on Goodreads. While the story had some insight into loss and the healing power of books, it had no strength. This came from a lack of structure. I pointed to Jean finding Manon, additionally letting go of his lost love in the process, as the overarching story goal. Yet even he didn’t seem to pursue that objective very strongly. He went on a mostly aimless adventure and made friends along the way. The added characters provided some color, but the lack of transition from scene to scene did not. Those poor people had no foundation upon which to stand.

This reminded me of how I ought to adjust the pursuit of some of my goals. Not having set times and strategies for tasks like job hunting and novel writing made it take even longer to get started, let alone see my desired progress. If I tightened my strategies with definitive times rather than as soon as I can, I could see better results. My high aims for my routine, my writing, my career and my life can stand better on a solid structure. It also would make it easier for others to grasp beneficial ideas and insight from my structure and what’s built into it.